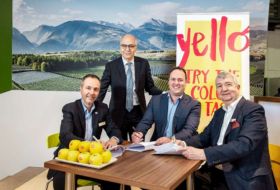 The agreement was signed at Fruit Logistica in Berlin

The family-owned company signed an agreement with Italian apple marketers Vog and VI.P at Fruit Logistica in Berlin last week to begin commercial programmes. The deal comes after Montague ran a small-scale consumer testing exercise with the branded variety in Australia last year.

“Yello has a bright yellow skin, complex flavour, and sweet, crunchy, crispy, juicy flesh,” said Montague director and third-generation family member, Scott Montague. “With its slightly exotic and tropical aroma, this new apple has all the characteristics that consumers look for in an eating apple.

“Shoppers can expect to see the first crops in retail stores from Easter with availability until the end of June.”

The Shinano Gold apple – the variety to which Yello is the brand name – was bred by Japan’s Nagano Research Centre. It is a cross between the Golden Delicious and Senshu varieties.

VOG and VI.P, fruit growers’ associations based in the South Tyrol region, hold the exclusive worldwide production and marketing licence to the variety.  The pair also co-own the Yello brand name, along with the prefecture of Nagano.

Montague has already undertaken trial plantings of the variety in Australia, with inital signs positive.

“The Gippsland area in which we planted the first trees has proved to be particularly compatible with the cultivation of this premium apple, so we were delighted to sign a sub-license agreement with VOG/VI.P to be able to produce the first Yello apples in this country,” said Scott Montague.

Launched in the Italian market in November 2016, Yello is already garnering plenty of consumer interest among consumers in Europe and Asia. Montague is confident of replicating this success in Australia.

“With its colour, crunch, and tropical flavour I think Australians will simply love Yello and it will quickly become a school box, snack time, anytime favourite," said Scott Montague.