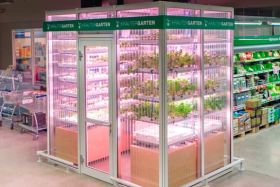 Infarm has expanded to Asia after singing an agreement to supply modular farms to Kinokuniya, the food retail arm of East Japan Railway Company (JR East).

The partnership, which announced a partnership with on 25 February, includes a declaration of capital investment in Infarm. The Berlin-based company expects to deliver a range of fresh produce grown and harvested in Kinokuniya retail stores starting around the middle of 2020.

Infarm also reached an additional agreement with national food distributor Muroo Co. will support a phased expansion of Infarm across Japan in 2021.

Together, the agreements will support Infarm's extension into in Japan which will be headed by Infarm Japan, the company's new affiliate in the region.

"Japan's densest cities represent both the challenge and the potential of distributed, modular urban farming for cities around the world,” Erez Galonska said.

“Our partnership with such strong allies as JR East, Kinokuniya and Muroo Co. not only mark Infarm's entry into a nation known globally for the care and quality of its food culture, but accelerates our ability to build an ecosystem of partners worldwide who together will be able to feed the 7bn living in cities by 2050, with fresh, sustainable food.”

The individual farms are connected and remotely controlled from a central farming platform that gathers up-to-the-minute information about each plant's growth and learns, adjusts and improves itself continuously.

Infarm staff regularly visit the farms to harvest mature plants, place them at the point of sale, and plant new seedlings for the next cycle.

Ikuo C Hiraishi, managing director of Infarm Japan, was excited by the opportunities expanding into Asia would present.

"Infarm offers an innovative, consumer-centred approach to urban farming that can contribute to the dynamic conversation about how we think about the relationship between technology and sustainable food here in Japan,” said Hiraishi.

“As one of Infarm's early-stage investors and managing director of Infarm Japan, I'm excited about the opportunity we have to partner with others across our food industry, as we work together to build a better future.”