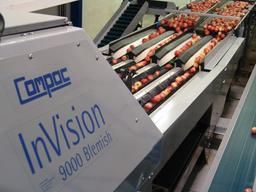 The deal is Compac’s largest to date, and also represents the company’s future business direction in turn-key projects.

Propal is Chile’s largest avocado producer and second-largest lemon producer, and put out tenders to upgrade its 4ha packhouse in 2007 after it projected annual growth at 17 per cent.

“We’ll be putting in place a complete packhouse solution covering all product handling equipment from fruit arrival and grading right through to sorting, packing and dispatch,” said Mr Buys.

The equipment being supplied by Compac will include a 10-lane pre-sorting line with five packing lines, which will be used to grade avocados, lemons, mandarins and kiwifruit.

“The whole line is capable of grading, sorting and packing 80 bins of avocados every hour or approximately 2,600 pieces of fruit per minute,” explained Mr Buys.

Compac also redeveloped its apple sorting software for the project to detect blemishes in avocados – a world first, according to Mr Buys.

The Propal deal builds on Compacs earlier success in Chile with exporter Frusan, with which Compac signed an NZ$4.5m contract earlier this year.

The new Propal packhouse is expected to be fully operation by July this year.