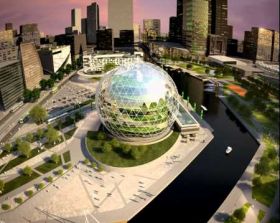 Urban farming is much more important to global food production than previously thought, a new study has found.

The research, which used satellite imagery to create the first global assessment of urban agricultural land, found that 456 million hectares – an area the size of the European Union – is being cultivated in and around the world’s cities.

It aimed to highlight the role of urban farming in food security and sustainable development, the counter the rural focus of most agricultural policy work.

“This is the first study to document the global scale of food production in and around urban settings and it is surprising to see how much the farm is definitely getting closer and closer to the table,” said co-author Pay Drechsel, a scientist at the International Water Management Institute (IWMI).

“We see this dichotomy where urban farming in wealthy countries is praised for reducing emissions and enhancing a green economy while in developing countries, it can be regarded as an inconvenient vestige of rural life that stands in the way of modernization,” Drechsel said. “That’s an attitude that needs to change.”

It concluded that irrigated urban croplands will play a larger role in more densely populated and water-scarce regions, such as South Asia. “In fact, today, some countries such as large parts of India are already more peri-urban than rural. And here we see how urban water needs compete with agricultural demands,” said Drechsel.

And rather than growing cereal crops, the study found urban farms are actually more likely to be supplying highly nutritrious crops, such as fresh vegetables. “In urban areas of Ghana, everyday there are about 2,000 urban vegetable farmers supplying greens to 800,000 people," Drechsel added.

The International Water Management Institute (IWMI) is a non-profit research organisation focusing on the sustainable use of water and land resources in developing countries. It is based in Colombo, Sri Lanka.

The study was published in the November 2014 issue of the journal Environmental Research Letters.