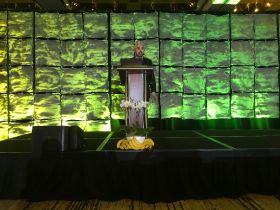 Global warming could result in more regions of the world being able to support banana production, but that change won't be without its challenges.

That was the view of José Manuel Gálvez, research meteorologist at the scientific agency NOAA in the US, who told the International Banana Congress that climate models indicate there will be an increase in the frequency of droughts in banana-producing areas such as Central America and the Amazon basin.

With that could come associated problems such as a greater incidence of pests in areas such as northern Colombia, he warned.

But rising temperatures will mean areas previously considered unsuitable for producing bananas – which require warm weather – could start to come into play. “This will allow the relocation of banana production into higher altitudes, though it may require more irrigation,” he said.

A further complication would face producers who also grow crops such as coffee on mixed farms if both are not suited to the new location, he added.