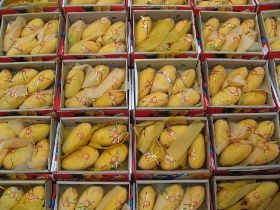 Pakistani mangoes on display in London

The Federation of Pakistan Chambers of Commerce and Industry (FPCCI), along with Pakistan Fruit and Vegetable Exports, Importers and Merchants Association (PFVA), are creating a plan to achieve a US$6bn target by 2030 for the country’s horticultural exports.

FPCCI vice president, Waheed Ahmed said he wants to hand over the plan to the chosen government following general elections on July 25. The full plan is expected to be released during a ceremony on July 18.

Ahmed told The Express Tribune that three areas will require focus to achieve the goal. “The area of production will have to be increased for horticulture production. Varieties will be increased for export purpose. Thirdly, modern techniques will be employed to increase yield per unit area,” he said.

Ahmed predicts this move will allow producers to move toward value-addition, which he says can only be achieved with surplus product.

The Tribune reported that Pakistan’s economy is facing a growing account deficit and weakening currency, causing higher interest rates and inflation for locals, meaning increasing export activity is “crucial” for the economic health.

Ahmed believes Pakistan needs to move toward producing more exportable varieties, away from traditional items like potato, mango, and kinnow.