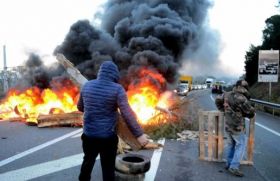 Produce destined for the UK wholesale trade from France has been disrupted by farmers’ strikes in the country after train lines were blockaded with burning vegetable pallets.

Pallets coming from Morocco were delayed on a train after protestors set fire to the tracks between Narbonne and Carcassonne. At the time of writing it was not clear if the disruption had been cleared and if normal trade in affected areas has resumed.

“It is affecting arrivals from Perpignan region. They blockaded the train line from Narbonne to Carcassonne last night, which meant we had some produce from Morocco miss connections,” said sales director, Eddie Bowers.

Bowers added that there have been reports that farmers have set fire to tyres, straw and pallets to blockade roads around Carcassonne.

"We want to show that it's not going well in the countryside. We want the government to respond to (the effects of) the Russian embargo," the Young Farmers president for Bourgogne in east-central France told Yahoo News.

According to reports, around 700 farmers and growers from the Paris region handed out free vegetables in a central Paris square, while across the country farmers dumped manure and slurry outside local authority buildings to protest against EU regulations that ban the use of a fertiliser.

Another union leader, Damien Greffin, told the news outlet that farms are threatened by the collapse of prices caused in part by the Russian imports ban.