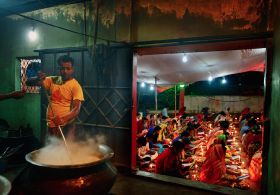 Food for God, by Shoeb Faruquee

Bangladeshi photographer Shoeb Faruquee has been crowned winner of the Pink Lady Food Photographer of the Year 2017 for his image of cooking for worshippers at a temple.

Faruquee was presented with a cheque for £5,000 at the awards reception, held last night (25 April) at the Mall Galleries in London, by Coregeo managing director, Andy Macdonald.

He also won the Food for Celebration category, earlier in the evening, before scooping the overall trophy for his image, Food for God.

A total of 8,400 images from over 60 countrie were entered in the annual photography awards, which is in its sixth year.

Macdonald said: “Shoeb’s shot stood out from the rest in its category, for the way in which he made the subject matter – cooking for the breaking of a religious fast – both incredibly striking and atmospheric.”

The evening was compered by chair of the judges, journalist and food critic, Jay Rayner. Guests included photographers, food writers and bloggers, as well as members of the Waitrose, M&S and Tesco produce team.