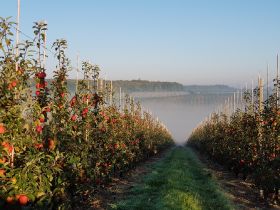 Jazz has once again been voted the 'UK’s Tastiest Apple' after grower Chris Levett of Baretilt Farm in Kent picked up the accolade at the National Fruit Show.

Simon Bray of Monks Farm made it a one-two finish for the branded club variety, scooping second prize.

Taking place at the Kent Event Centre on the 25 and 26 October, the National Fruit Show champions the UK’s best commercially-grown topfruit and soft fruit. Sitting at the heart of the event is a 60-metre display stand of the apple and pear competition entries.

Jazz, which is a cross between Braeburn and Royal Gala, has now won the award four times in six years, and in April the variety overtook Cox to become the UK’s fifth-most popular apple, growing its retail sales to an all-time high of £46.5 million in the year to 25 March.

Next up for the apple brand will be the BBC Good Food Show at the NEC in Birmingham at the end of November where viistors to the four-day event will be able to sample UK-grown new-season Jazz.

Gary Harrison of Worldwide Fruit, who is the UK commercial manager for Jazz, said: “We are proud and delighted to have won this award, and it sets us up nicely for the commencement of the new season in a matter of days’ time.

“Hats off to Chris and his team who have put in the hard work all summer to produce some stunning apples.  It’s our fourth win in six years, and it comes after we recently hit over £50m in consumer spend over the last year so it’s the perfect way to start the season.”

He added that the brand expected to see continued sales growth in the coming years.