Agreement “takes back control of agriculture" 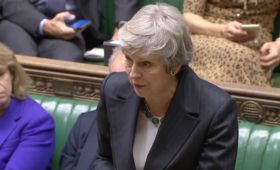 Theresa May outlined her EU Withdrawal Agreement to MPs in the House of Commons this morning, stating it will ensure Britain decides its own agricultural and environmental policies.

May delivered her exit plan to a raucous Commons who will have to vote on the agreement, after a special EU council on 25 November to finalise the proposal.

May managed to get the backing of her cabinet last night, albeit with two ministers, Brexit secretary Dominic Raab and Work and Pensions secretary Esther McVey already resigning in protest against a deal they say does not honour the referendum.

May’s Withdrawal Agreement ends free of movement of people while keeping Britain in a free trade area with Europe, with zero tariffs or restrictions across all goods. The proposal also commits to a “backstop” plan on the Northern Ireland border for a “time-limited period” in the event of no future deal with the EU being agreed by 2020.

Addressing parliament May said: “The declaration ensures we will be leaving the common agricultural and common fisheries policy so we will decide how best to sustain and support our farms and environment, and the UK will become an independent coastal state once again.”

May urged MPs to back her plan when they come to vote on the agreement, saying a vote against her deal “would take us back to square one”.

She continued: “This deal is a deal that ends free movement of people, takes back control of our border, laws and money, delivers a free trade area for goods with zero tariffs, leaves the common agricultural policy and common fisheries policy, delivers an independent foreign and defence policy while continuing cooperation to keep our people safe, maintains a shared commitment to high standards, protects jobs and honours the integrity of the UK.”

Numerous MPs spoke out against the deal in parliament, grilling Theresa May over the Agreement, not least Labour leader Jeremy Corbyn, who said: “The Withdrawal Agreement represents a huge and damaging failure, after two years of bungled negotiations the government produced a botched deal that breaches the government’s own red lines. Their deal risks leaving the country in an indefinite halfway house without a real say.”

During questioning Faversham and Mid Kent MP Helen Whately asked May what plans the government were proposing to prevent “gridlock” at Dover port, a crucial gateway for fruit and vegetable supply.

May told Whately that ensuring “seamless” movement of goods “was a key element at the forefront of our thinking”.

They said it includes the “essential elements” which will allow continued frictionless movement of goods, such as fruit and vegetables, while maintaining the integrity of the UK’s supply chain.

David Wells, chief executive of FTA said: “Based on the briefing I received this evening from the Chancellor and the Business Secretary, the draft text seems to have recognised the vital importance of preserving the frictionless movement of goods and the availability of EU workers whilst a new permanent trade deal is negotiated.

“If so, we believe it is crucial that MPs understand how important these outcomes are to economy and the economic security and welfare of the country”.

NFU president Minette Batters said the Agreement “paves the way for a free and frictionless trade with the EU,” something the NFU has thrown its weight behind from the beginning.

“This trading relationship allows British farmers to provide safe, traceable and affordable food to the public, all while adhering to some of the highest animal welfare and environmental standards in the world. It is critical that we avoid the mayhem of a no-deal Brexit in March of next year,” Batters said.

She added: “Despite today’s progress, there is still much work to be done. I would urge all involved to remember the importance of British food and farming when considering their support for the new agreement.”