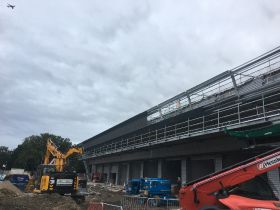 The dispute between traders and authorities at London’s New Covent Garden Market has thickened after tenants launched a new round of legal action.

Seventeen tenants from the market began litigation proceedings against Covent Garden Market Authority at the start of August, for a breach of lease contract, relating to concerns over standards of the units in the new market building.

The traders’ dispute is the second legal battle fought by wholesale businesses against the market authorities, following the tenants’ association lawsuit against the CGMA for failure to adequately consult them on the redevelopment of the market.

With the first of the new trading units nearly finished, traders were scheduled to move into the new building in April next year, described as “Phase One” of the redevelopment. Wholesalers have raised several concerns with the new units however.

CGTA chairman Gary Marshall said the market authority’s response to concerns over the new units has been “outrageous”, accusing them of telling traders to “take it or leave it”.

“The biggest problem that we face are the logistics of the market, how the suppliers and tenants operate efficiently,” Marshall said.

“Phase One tenants are due to move into the new building in April 2020 but unfortunately the building they are being asked to move into, the units are not up to spec in several areas.

“There are a lot of concerns as to what will be included in the units, with issues from electricity capacity to how tenants will unload the vehicles. This has led to several Phase One and Two tenants taking legal action against the CGMA; 17 of the 18 Phase One tenants are taking the action.

“The response from the CGMA has been outrageous, they told tenants yesterday to take it or leave it. Their threatening behaviour towards tenants is continuing.”

One of the traders scheduled to move in April, Stuart Allison from Allison Risebro, said his company has been asked to pay extra costs to move into the new units, describing them as a “step backwards”.

“The biggest issue is getting produce in and out in an efficient manner. There’s no loading area and they have not asked tenants what will work efficiently. There will be accidents,” Allison claimed.

“Every business here has different needs. We therefore agreed as part of the consultation with tenants that they are responsible for the fit-out of their new units. This allows them the chance to tailor their fit-out to meet the requirements of their business,” he said.

Tomkinson said CGMA is providing all traders with the opportunity to relocate to the new market, adding: “Ultimately, however, it is the tenant’s choice whether or not they choose to relocate.”

He said tenants have been offered over £12 million by the authorities to fit out the new units, in addition to offering rent-free periods of up to 12 months. “Based on current rents at NCGM this amounts to a generous package, which equates to between two-and-a-half and four years’ worth of rent to commit to a ten-year lease with a five-year break clause.”

"We genuinely believe the new market will work and are excited to have our existing tenants as part of the future of New Covent Garden Market. We are working with individual tenants to understand and address concerns they may have in respect of their businesses and to try and address these if we consider it reasonably possible."