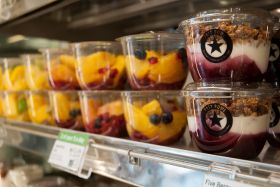 Increased consumption of food to go is eating into spending on household food, according to new findings by shopper insight specialists Shoppercentric.

The research in the analyst’s 50th Shopper Trends report shows that four in five UK shoppers have eaten a meal that wasn’t prepared at home in the last month.

Meanwhile, one in ten believes their spending on household food, including fruit and veg, has reduced as a direct result of their ‘food-to-go’ spending habits.

The data confirms that Millennials and Generation Z shoppers are at the heart of the trend and are doing so more often than they were two years ago.

One in 10 shoppers believe their household food spending has reduced as a direct result of their ‘food-to-go’ spending habits.

“The research shows us that widening choice, easy accessibility, and pricing to cater for all tastes and budgets, means that many shoppers relying on ‘food-to-go’ believe their spending in those outlets will increase, which likely means more pressure on grocery spending,” said Shoppercentric’s managing director Jamie Rayner.

“Perhaps most worryingly for already under-pressure grocery retailers is that cash-rich Millennials, and Gen Z, are at the heart of this trend. They are the age groups who are most likely to have eaten food when out, or that was prepared away from the home.

"They are doing this more often and they are the ones most likely to say food to go is causing them to spend less on groceries.”

Rayner says there remains, of course, the possibility that these younger shoppers will turn into more budget-conscious, cook-at-home parents as they get older, though he doubts food to go really is a passing phase. Habits are forming.

“The fact that the food-to-go category is embracing healthier options and sustainability more quickly than grocery retailers means that no one in the grocery sector can afford to turn a blind eye to this challenge,” he said.

“For the supermarkets, food to go is a competitor hiding in plain sight and presents a growing challenge to which they need to rise.”