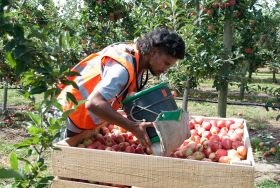 Britain’s topfruit industry has launched its own recruitment site calling on Brits who have lost their jobs due to the coronavirus crisis to apply for pruning and picking jobs.

With orchard picking operations set to begin on August, topfruit growers across the country are having to act fast. Huge concerns remain about agricultural labour shortages due to worldwide travel restrictions hitting the predominantly European labour supply to British farms.

According to British Apples & Pears over 11 million people could end up furloughed or unemployed over the next three months and, at the same time, the fruit picking industry is facing severe staffing shortages.

The organisation estimates that 10,000 picking jobs will be available in its members’ orchards from August to October. There will be a much smaller number of jobs available in June for apple thinning and summer pruning in orchards that are critical to ensuring a quality harvest later in the year.

"Our newly launched recruitment campaign is designed to put people looking for work in direct touch with apple and pear growers who need help getting our delicious fruit from the trees to our tables.

"Fruit picking is hard work, but it’s rewarding knowing that you’re doing a valued job and it’s also a great time to be out in the beautiful British countryside.”

Harvest workers are paid at the national living wage and on many farms a productivity bonus is paid to workers based on the quantity and quality of their picking.

The British Apples & Pears recruitment campaign will include targeting people who had previously worked in the hospitality industry and have lost their jobs due to COVID-19, as well as university students and workers from other sectors.

To find out more about the apple and pear orchard job opportunities, visit: https://britishapplesandpears.co.uk/job/