What does UK-NZ free trade deal mean for fruit sector?

Will NZ exporters target the UK with increased volumes of fruit following the recently signed FTA or will Asian markets take prominence? John Giles of Promar International assesses the situation 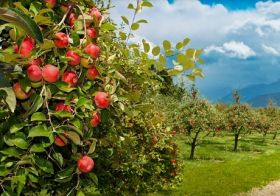 In late October, the UK and New Zealand agreed in principle to sign a Free Trade Agreement between the two countries. This has come about as a result of the UK’s decision to leave the European Union. One of the main motivations to do this, was of course, the ability to develop its own trade agreements, independent of the rest of Europe.

An agreement with New Zealand was always going to be relatively high on the agenda for the UK, along with other countries such as Japan, Australia, parts of the Middle East. More complex trade discussions with the likes of India and the US are still ongoing.

A springboard to other trade deals

Not least, the UK sees securing deals with the Oceania countries as a way of looking to ultimately engage with the wider trade bloc known as the Comprehensive and Progressive Agreement for Trans-Pacific Partnership (CPTPP), which is an FTA between 11 countries around the Pacific Rim: Canada, Mexico, Peru, Chile, New Zealand, Australia, Brunei, Singapore, Malaysia, Vietnam and Japan.

Under the UK–NZ agreement signed in October, the tariff on pears will reduce to zero on the date of the agreement coming into force, with a seasonal tariff on apples from August to December reducing to zero over a three-year period.

In the UK farming community, the reaction to the NZ deal has been cautious at best. In particular, dairy and beef/sheep farmers have been very concerned that highly cost-competitive producers and exporters from NZ will undercut them in the market and may not be subject to the same high standards of animal welfare and food safety that UK producers are in their own domestic market.

The National Farmers Union, led by the highly charismatic and well regarded Minette Batters, has been especially vocal on these concerns. The focus to date has been very much on the dairy and livestock sectors, and far less on the horticultural industry, where NZ has been a traditional supplier of apples, pears, kiwifruit and, of course, wine.

Although early indications were for a near-record New Zealand apple crop in 2020/2021, several factors have since tempered expectations. Production is now estimated to have fallen by around eight per cent from the previous year to 545,000 tonnes. Two of these factors were hailstorms causing widespread damage in key apple-producing areas, as well as generally smaller-sized apples this year due to a cooler summer.

In addition to reduced production, the impact on exports has been exacerbated by severe staffing shortages during the harvest. Apple production in NZ is still largely dominated by the likes of Braeburn, Cripps Pink, Envy, Jazz, Fuji and Pacific Queen.

Where does the UK fit in?

The NZ apple sector is highly dependent on exports and for 2020/202, these are forecast at around 345,000 tonnes. New Zealand’s apple exports are strongly diversified, with significant volumes going to Asia, the EU, the US and the Middle East. In terms of the UK, this is the second-most important export market, after the rest of the EU for the NZ industry, with volumes of around 40,000 tonnes in a normal year.

As an export market, the UK is then closely followed by the likes of China, and other south-east Asian countries, such as Vietnam, Thailand and Taiwan. Russia and India have also seen strong growth in the last five years for NZ growers and exporters.

The UK normally imports around 450,000 tonnes of apples per year and NZ is historically the third-largest supplier of imports, after France and South Africa. On top of these imports, the UK, in recent years, has produced 175–200,000 tonnes of fruit per annum.  Overall, therefore, NZ has a share of the UK apple market of around 5-6 per cent in total.

In some ways, there is an irony in the latest developments in UK–NZ trade arrangements in agriculture and food. Before joining the EU in the early 1970s, NZ and other Commonwealth countries, such as Australia and Canada, were major suppliers to the UK of meat, dairy and horticultural products, but the attention was switched to developing trade with our new European partners on the continent.

How comfortable the UK really ever was in being a member of the EU is open to debate, but in 1975, just two years after joining, there was a national referendum on whether we should remain “in”. We did, of course, but the whole issue of our relationship with the rest of the EU has been one that has never really gone away.

Fast-forward another 35 years and the wheel seems to have come full circle, as we re-develop the trade relations with NZ and Australia, while still experiencing significant trade friction at the point of entry with many European suppliers.

NZ has remained, throughout this time, an important supplier to the UK and will likely to be so in the future. At the same time, will NZ exporters target the UK with significantly increased volumes of fruit as a result of the recently signed FTA, when there has been a strong strategic focus on India, China, other south-east Asian markets over the last 10 years or more? This is less clear.

In the UK, there is strong support for British farmers among the UK supermarkets, and the whole issue of moving fresh food around the world and its environmental impact will come under increased scrutiny. This is not least as a result of the discussions on reducing carbon emissions from the supply chain that have been held at the COP26 summit in the last few weeks.

Some NZ exporters have clearly targeted the UK market for a long period of time, and they are unlikely to go away. Others, as a result of the FTA, might look again more closely at the opportunities in the UK. And why wouldn’t they? Asian markets are still highly appealing, however, and to expect an additional flood of NZ fruit imports into the UK, in the short term at least, looks unlikely.

John Giles is a divisional director with Promar International, the consulting arm of Genus plc. He has worked in the past on top fruit projects in the UK, the rest of the EU, the US, Canada, Chile, South Africa, the Gulf, China, India, New Zealand and Australia. He is also the current president of the Chartered Institute of Marketing’s Food, Drink & Agricultural Group.