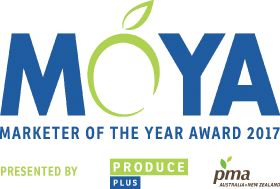 PMA Australia-New Zealand and Produce Plus Magazine have announced the five finalists for the PMA-Produce Plus Marketer of the Year Award 2017, now in its sixth year as the premier award for marketing in the Australasian fresh produce and floral industries.

From a strong field of entries, the five finalists are:

The Marketer of the Year Award, which recognises outstanding achievement over the past year in the marketing of fresh produce in Australia and New Zealand, attracted an impressive scope of entries from all points of the value chain.

“This year, we’ve once again received some incredible entries for this award, showcasing the excellent and innovative work being achieved by fresh produce marketers,” said Produce Plus editor Gabrielle Easter. “With such a range of entries, narrowing it down to just five finalists has been a challenge.”

CEO of PMA Australia-New Zealand Darren Keating added: “This year’s entrants gave us a fantastic list of campaigns that collectively are doing a great job at increasing sales of fresh fruits, vegetables and flowers right across the industry. It’s great to see the hard work, creativity and strategy that all of these businesses have put into their marketing activities, and as an industry we should all applaud them for efforts.”

PMA and Produce Plus have congratulated this year’s finalists and thanked all of the nominees for their entries.

A report on the five finalists features in the upcoming Winter 2017 edition of Produce Plus, with the finalists also showcasing their campaigns during the Hort Connections conference in Adelaide on Wednesday 17 May.

The winner of the PMA-Produce Plus Marketer of the Year Award 2017 will be announced during the Hort Connections Gala Dinner at the Adelaide Convention and Exhibition Centre later that night.