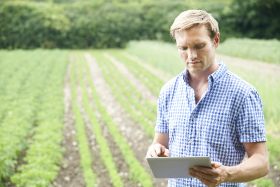 The New Zealand Internet of Things (IoT) Alliance has identified agri-business as one of the best placed to capitalise on IoT technology to boost productivity.

The independent member-base organisation commissioned the research study, ‘The Internet of Things – towards a connected New Zealand’. which found that as New Zealand’s agriculture sector already contributes a lot to the New Zealand economy it is in a great position to use IoT for economic advantage.

Chair of the New Zealand IoT Alliance and CEO of NZTech, Graeme Muller, said that adopting IoT technology would be necessary for the industry to lift productivity. While agriculture accounts for 40 per cent of New Zealand merchandise exports, and the country’s agricultural productivity growth is ahead of the world average, there is room for improvement.

“Given the scale of the estimated productivity gains across the agri-sector through better use of IoT, farmers, farm suppliers, the tech industry and government should resolve to accelerate its uptake,” Muller said. “While farmers are starting to use technology, including IoT, to increase productivity and reduce costs in the face of increased competition and compliance requirements, the uptake of IoT in agriculture is relatively low across the sector as a whole.

“There is no dispute that using IoT systems to augment the intuition of the farmer will have a huge impact in terms of improving productivity on the farm and improving its environmental and sustainability performance. There is the ability to grow more while using less in a way that the community will find more acceptable.”

Muller used the example of fruit and wine growers, who may lose fruit blossom to frost. IoT solutions, he said, could predict and manage frost conditions.

The other example given was New Zealand grower-packer AS Wilcox & Sons, which has integrated its operations, from field to consumer, using technology such as drones to check crops for quality and growth, and sensors to report on harvest.

“New Zealand packhouses, such as AS Wilcox & Sons, are involved in the entire supply chain of fresh vegetables including growing, picking, processing, packing and transporting. Technology has become an integral part of their success,” he added.

The challenges for adopting IoT is building up the credibility of the technology industry among growers, Muller said, and would need a cultural shift among agribusinesses to adopt new technologies.

The report recommends that the tech industry and the New Zealand government continue to support the development of high speed internet across rural regions; build standards such as water standards against which the industry can measure its performance; encourage tech-trained people to enter agriculture; and enhance the innovation side of agribusinesses.