The supply gap is expected to be filled by further imports, instead of domestic production 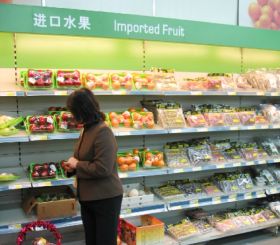 Supply of apples, pears, and grapes have been constrained from the US to China in recent months and are projected to continue during the 2018/19 season.

According to a USDA Gain report, the US fruit items are expected to lose market share in China despite adverse weather events in China’s apple and pear growing regions.

For table grapes, the US has no other apparent competitor, so import volumes are forecast to decrease by 7 per cent despite an expected increase from Southern Hemisphere suppliers.

Consumption of fresh fruit is reportedly steadily growing in China, as the items become a core part of citizens’ daily diets. An increased focus on health, improved availability and selection are said to be contributing factors.

Due to the emergence of other domestically-produced fruit like lychees, grapes, cherries, and imported varieties like dragonfruit, mangoes, and durian, consumption of domestic apples and pears has shown signs of slowing.

Continuing expansion of cold storage facilities means the supply season is predicted to see an extension, however, high-quality apples and pears are in short supply and are aggressively sought after by China’s consumers.

Premium quality apples account for only around 30 per cent of China’s production.