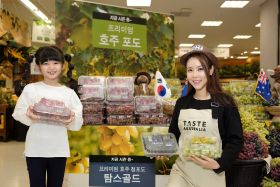 In 2018 the Taste Australia campaign was brought to Korea to introduce Australia's premium grapes to Korean consumers.

Initially, the campaign was run and grapes stocked exclusively, at Hyundai Department Stores, but this year export volumes have increased and Korean retailers Emart and Shinsegae Department Store have joined Hyundai as stockists.

Grapes can be purchased at all Emart outlets, and selected Hyundai and Shinsegae stores, as well as a number of franchise fruit shops and wholesale markets. Samples of table grapes were handed out between 28 March and 14 April to consumers in-store covering a range of different varieties.

In 2018 the import duty for Australian table grapes was also eliminated under the Korea-Australia Free Trade Agreement.

Australia’s table grape export season runs from January to May, and in the year ending June 2018, export volumes to Korea had almost quadrupled, up 379 per cent; albeit, from a small base, and in line with eliminations of the tariff, which reduced from 45 per cent to 6 per cent in 2017.

Since 2017, Australian table grapes have been promoted in the Korean market under a new brand name, Tams Gold. The name is a combination of the word ‘tams-rudba’, which Austrade says translates to ‘attractive, nice, ripe and delicious looking’, and the word gold which symbolises the golden/green colour of grapes.

At the time of the re-brand, Australian ambassador to Korea, James Choi, said the aim of the branding was to help assist Korean importers to satisfy the demand for quality grapes in Korea.

Joon Choi of major importer Soo Il Commerce said in mid-March he was gearing up for an aggressive approach toward grape promotions and has noted growth in the category due to increased volumes from the US.