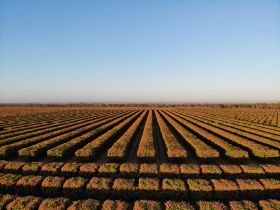 While weather conditions haven’t been ideal, Piñata Farms is still expecting a successful start to the upcoming seasons for a number of its fruit.

In Darwin, Piñata Farms expects to harvest its first crop of Honey Gold mangoes in the coming weeks. Its orchard is set on Darwin Fruit Farms, a joint venture between LaManna Premier Group and Piñata Farms.

Gavin Scurr, managing director of Piñata Farms, said the company decided to specifically grow in this region as it extends the seasonality the variety by up to two weeks.

"However, continued cool mornings across the Northern Territory this spring have pushed the harvest start date back a little from what we originally predicted. We expect to begin in late October or early November which is still about a week to 10 days earlier than Katherine.”

Scurr said he expected a consistent Honey Gold season from all growing regions, despite challenging windy conditions in the Northern Territory.

"Cool mornings and windy weather have impacted marginally on the size of the crop. We don't expect any challenges with fruit size or quality,” Schur said.

The crop, a joint venture with Berryworld, is expected to be harvested in late October despite a drought, which has brought little to no rainfall to the area in the past year. Piñata Farms has also had to forego planting a summer strawberry crop because of the conditions.

“The plants are just starting to flower and we expect to harvest in late October, with no impact on fruit quality.”