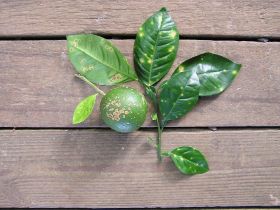 Australian biosecurity officers have announced a number of fruit items, including fresh limes, citrus peel, and dried citrus, declared by passengers at the border of major airports were confirmed to be carrying the infectious citrus canker disease.

In 2004 an outbreak of the disease had a major impact on the citrus industry, while the most recent case was detected in the Northern Territory in 2018. That spread to Western Australian towns Kununurra, Wyndham and other northern communities.

Western Australia was officially declared citrus canker free in November 2019, while efforts to eradicate the disease in the Northern Territory are ongoing and are expected to cost up to A$18.7m.

Head of biosecurity, Lyn O’Connell, said the items were intercepted on separate occasions and all tested positive for citrus canker pathogen.

“This is an example of the significant biosecurity risks that Australia faces and why it is so important to follow our biosecurity conditions,” said O’Connell.

“These recent interceptions are particularly concerning given there is an ongoing national response plan in place to manage previous detections of citrus canker in Northern Territory and Western Australia.

“In the past few months, a passenger arrived at Brisbane airport with one kilogram of limes and another brought dried citrus peel with them. Biosecurity officers also intercepted dried whole citrus fruit that was imported, and all of these items were confirmed to be carrying the citrus canker pathogen (and subsequently destroyed),” she added.

The interception of the infected citrus has prompted Citrus Australia chief executive, Nathan Hancock, to call for an increase in investment in border security.

“We appreciate the hard work of those at our border and appreciate their efforts to protect our industry and the community’s backyard citrus,” said Hancock.

“We commend the professionalism of Australia’s biosecurity officers and detector dogs, and they should be supported with additional resources. Unfortunately, the importance of biosecurity is being ignored by too many travellers and we need to bolster our capabilities to weed them out,” he added.

In 2019, a total 12,000 citrus items were intercepted at Australia’s international airports.

O’Connell noted the work of biosecurity officers and detector dogs, adding these interceptions served as a valuable reminder that prevention is a joint effort.