Chefs in UAE produce longest line of pies using pears grown in the US, with grand total of 2,209 pies made 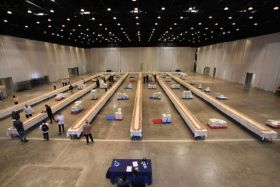 The Guinness World Record for the longest line of pies has been broken. Over 100 chefs from across the UAE joined forces on 4 January, producing a total 2,209 pies, all with a special ingredient: USA pears.

Each chef used the same pear pie recipe, using approximately 2.5 tonnes of pears to achieve the record. Upon achieving the Guinness World Record, the pies were donated to charity.

Guidelines were checked by Hickson, and several important rules had to be achieved for USA Pears to earn the reward. Pies were required to be within 6-10 inches wide and placed in a continuous line, and no food could be wasted.

The event was streamed on Facebook Live, reaching over 17,000 viewers. USA Pears said the event reached more than 30,000 people including many importers, retailers and traders of fruits and vegetables, as well as capturing attention in foodservice and consumer segments.