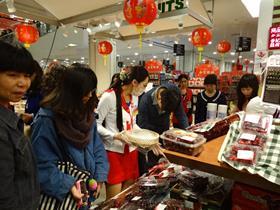 China is a growing market for Australian cherries

The Australian cherry industry is set to achieve 40 per cent growth in export volumes over the 2014/15 season, following the release of Cherry Growers Australia’s (CGA) January results that account for around 95 per cent of the season.

By the end of January, over 3,400 tonnes had been exported already, eclipsing the previous record of 2,890 tonnes registered in 2012/13 season. At least a further 300 tonnes are expected to be added to this total once the February figures are calculated, according to CGA.

Hong Kong and Singapore remain Australia’s leading markets, taking over 50 per cent of the export volume. Trade into South Korea has increased to 243 tonnes at a value of A$3.4m (US$2.6m), up from a negligible volume last year. The rise comes in the wake of a free trade agreement being implemented, which immediately abolished the 24 per cent tariff on Australian cherries in December 2014.

Chinese import volumes are expected to reach 400 tonnes, with further shipments to be recorded for February. This would see growth of over 150 per cent as the Australian industry develops new market opportunities in the People’s Republic.

These results are encouraging for the Australian industry, a small but high quality supplier to Asian markets. The extensive use of airfreight means Australian suppliers can have their fruit into the Asian markets in just over 10 hours from Melbourne Airport, delivering on their promise of freshness.

Australia’s main rival Chile has also boosted its trade by over 40 per cent this season, delivering around 77,000 tonnes of cherries to Asian markets. This includes some 70,000 tonnes exported to China, according to Chilean export statistics released until the end of January.