Australian mango crop down for 2020 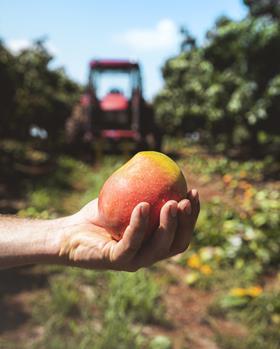 The 2020 Australian mango crop produced the lowest volume in seven years, defined by a later start, no real peaks, less product being exported, and the constant dance with Covid-19 all to blame.

The Winter edition of the Australian Mango Industry Association’s (AMIA) publication, Mango Matters, reports production didn’t reach the heights predicted at the beginning of the season.

“Despite a slightly later start, the beginning of the season was filled with the promise of a big crop, with weekly volumes tracking in line with the previous two seasons through to the end of September,” said Treena Welch, Australian Mangoes marketing manager.

“As we moved into October and November the volume collapsed and didn’t rise again through Christmas and the second half of summer, culminating in 23 per cent drop in volume versus 2019.”

A total 8.2m trays were harvested in 2020, with the decline in production volume leading to a significant reduction in the number of mangoes available through domestic retail channels, reflected in the year-on-year (YOY) volume decline of 21.7 per cent.

The lower volume resulted in less households buying mangoes (down 7.2 per cent). However, AMIA observed shoppers were prepared to pay a higher average retail price due to the limited fruit.

“Bringing new buyers into the mango category and moving them up the ‘Ladder of Love’ has always been our long-term game plan,” explained Welch.

“Ultimately, we want to grow the ‘Wedded Buyer’ segment and for good reason. During the 2020 season, 22 per cent of mango buying households were ‘Wedded Buyers’—they were responsible for purchasing 50 per cent of volume and represented 51 per cent of spending.

Welch said ‘Wedded Buyers’ love Australian mangoes and will pay more for the experience, while spreading the word. “They are quite simply our greatest advocates, and we must retain and grow them.”

AMIA’s mantra of “Impulse is King, and quality is Queen” continues to be the primary motivation for why consumers buy mangoes, noted Welch.

“In 2020, our lowest volume year, we achieved the highest number of mango print media advertisements ever (483) and retained the highest share of voice (SOV) score—ranking mangoes number one in the fruit category, an exceptional result.”