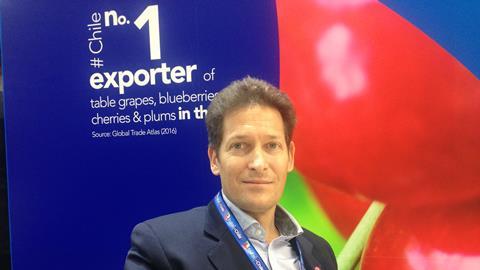 Chile exported 356,385 tonnes in 2021/22, an increase of 1.11 per cent on the previous season. But despite closing the campaign with a record shipment volume, the industry characterised it as “one of the most difficult on record”.

For the third consecutive year, the Cherry Committee said the epilogue to the season was worse than expected.

“We were prepared for a tough season and aware of the great challenges that lay ahead, from health uncertainty, logistical tightness, labour shortages and other challenges,” said Asoex president Ronald Bown.

“The strategic focus of the committee was to work as an industry together with [plant health authority] SAG to ensure we had a better quality of cherries.”

According to Cristián Tagle, president of the Cherry Committee, the season got off to a strong start, with “good quality and outstanding prices, along with greater diversification to other destinations besides China”.

Tagle said this demonstrated that the committee’s introduction of quality criteria was paying off.

“However, the external shocks generated very negative impacts, as did the increase in inspections of imported fruit in China, which caused an unexpected upheaval by extending the time it took containers to enter Chinese territory,” Tagle said.

As Chile ramped up its weekly shipment volume to 1,500 containers, delays to fruit entering the market got even longer. This was exacerbated, Tagle said, by the emergence of the Omicron variant, resulting is the bulk of arrivals being sold 40-60 days after it was harvested.

“This meant that we had to sell around 40 per cent of our volume after the Chinese New Year holiday, something unprecedented for the cherry industry until then,” he explained.

Despite the committee’s best efforts to reactivate demand by investing an additional US$1m in marketing, the poor condition of the fruit made it impossible for it to be sold at a good price, and this had a significant impact on the results for the season as a whole.

Overall, the committee said it had been a very mixed season, with results depending on the variety (Regina being the worst affected), quality and condition of the fruit on arrival.

The committee said 88 per cent of Chile’s total cherry export volume went to China this season, down from 91 per cent in 2020/21.

Shipments to the US grew 100 per cent, while exports to other Asian markets were also up, notably to South Korea (+25 per cent) and Taiwan (+30 per cent).

“Without a doubt, a further increase in investment in new markets will be required, both in terms of marketing campaigns and logistical issues,” Tagle said.

With respect to returns, he acknowledged that producers would have to moderate the expectations they had three or four years ago.

“China has shown that it is willing to pay attractive prices for good quality cherries after the Lunar New Year, while other markets have shown that they can consume a significant volume of cherries at a very competitive price,” he said.

“We must also take into account that other markets will pay good prices for high quality fruit – albeit less that what we can obtain in China in a few weeks.

“If we manage to make decisions thinking in the medium term, to develop new markets, this will allow us to capture the potential that countries outside of China represent.

“Continuing to think in the short term will make it more difficult to achieve successful diversification.”

Tagle said it was important to continue to provide China with a better product while advancing in the matter of diversification.

“We cannot lose sight of the goal. Market diversification is undoubtedly a necessary path, but it is not the only path. Satisfying the main market is – and will continue to be – the biggest challenge.”

Tagle said Chile should also prioritise increasing shipments to ports in the centre and north of China “since it is a sensible and natural evolution for the volumes to come”.

Finally, he stressed the importance of working together for the future of the industry. “The industry has come this far with unity and resilience, attributes that will be essential for the challenge that lies ahead, which I have no doubts, we will overcome,” he said.