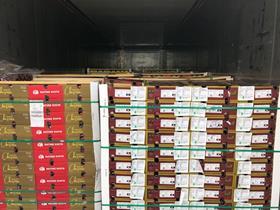 Arriving on the evening of 29 January, a seafreight shipment of Chilean cherries has landed successfully at a port in India.

The fruit was released on 30 January, to importer NGK Trading on the ground, after its 43-day journey. NGK Trading said it’s the first seafreight shipment of Chilen cherries to be received by an Indian trader.

Gagan Khosla, NGK Trading CEO told Fruitnet that the quality is excellent and the fruit held up well in transit. He also noted that the cost of seafreight was some 30 per cent less than airfreight.

“The fruit is being sold through conventional wholesale, as retailers are too scared,” noted Khosla.

“We hope to multiply this next season and expect tremendous growth in demand in coming seasons due to lower prices and excellent quality. The packers did a phenomenal job.

“The Chilean cherry demand has been growing annually for few seasons and now seafreight will open floodgates,” he said.

The fruit was shipped by Exportadora Del Sur and Natire South Exports, and received by NGK Trading. Chile and India have been building bilateral trade since 2006 when the two countries signed a partial scope agreement which was renewed in 2017.