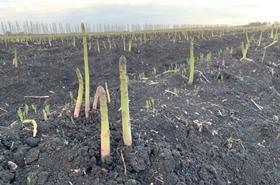 Japan has long been the big export market for Australian asparagus, but China shows signs of becoming an exciting growth opportunity for the industry.

Australia exported 4,483 tonnes of asparagus last season, with Japan taking 3,211 tonnes, according to figures from the Australian Bureau of Statistics. A range of other Asian markets accounted for much of the balance of exports, including Singapore (390 tonnes), Hong Kong (282 tonnes), Taiwan (259 tonnes) and Korea (163 tonnes).

China came from virtually nowhere to register imports of 104 tonnes, and it is this sixth-placed market that the industry is pinning its hopes on becoming the next big export destination.

Grower-packer-shippers Vizzari Farms and Momack Produce, which are based in Australia’s main production region of Koo Wee Rup in Victoria, dominate the country’s production and exports.

James Terry, who coordinates exports for Vizzari Farms, says trade into China gained traction last year, particularly on the wholesale side of the business. “To date, the volumes have not been huge, but there is scope to increase them quite significantly if China proves to be a large market,” he says.

China is a huge producer of asparagus, Terry notes, with a sizeable percentage of production going to canning – all positive from a consumer awareness perspective. “Consumers understand the product, but Chinese asparagus is a different product. It has a thinner spear, its paler and the taste differs due to the growing conditions. Consumers are not fully aware of imported product, or the price points we need to achieve – domestic prices are much lower.”

Nevertheless, Vizzari Farms has been developing retail and wholesale programmes in China, predominantly through importers, including companies specialised in high-end fruit crops. “There’s a growing recognition that Australian asparagus is different to local and Peruvian product,” says Terry. “It’s helped by the short time from harvest to market – our product can be airfreighted overnight.”

Beijing and Shanghai are the key destinations in China for Vizzari Farms, and the company is seeking to increase volumes this year. “We had a good run in November last year with wholesale, but we’d like to try and bring it forward. Chinese asparagus is around until October, even November.”

While the Australian season is running later than usual this year, exports kicked off in earnest in late September, with availability peaking now (around 10 October), Terry says.

Purveyors International, another well-established player in Australian asparagus exports, is also seeking to capitalise on the exciting potential it sees in China. “We sent some shipments as a start off last year, and we’re hoping to ship 100-200 tonnes this season,” says managing director Robin Johnson.

Puveyors is predominantly supplying retailers in China via its import partner, with asparagus “bunched and barcoded”, he explains.

While Japan remains a key market, Johnson says prices tend to drop off rapidly nowadays as soon as significant volumes come online in October. “Our dollar is very low right now though; it’s around ¥73, so that will probably bring more buyers into the market,” he adds.

All of this makes China’s prospects as a premium market even more important. Another attraction China holds as a market is its interest in a range of sizes, according to Terry. “That’s advantageous for us producers since we cannot control the size of the spears,” he says. “Japan also takes a range of sizes but in some other markets in Asia, there is a preference for one size, which can be restrictive.”

Terry says product is prepared in range of packaging options. “Retail trade is done in bunch packs with bar codes, but we also provide plastic and wooden boxes in various sizes, and loose packs for the food service and wholesale trade.”

Australia’s asparagus exports started slowly this year, notes Terry, with the domestic market taking a significant percentage of early season production. While domestic demand in Australia continues to grow, and remains a key outlet for production, he is optimistic about the overall export prospects for the industry. “Our access to Asia is second to none – we have direct flights to all markets, and we can get product to countries within 48 hours of harvest with no quarantine restrictions or market access issues.”

Indeed, the positive outlook on both domestic and export fronts is driving significant new plantings. “There are new plantings going in every year,” notes Terry.