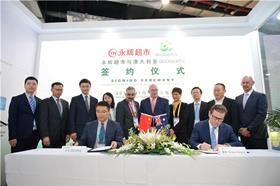 Yonghui Superstores will become the retail channel for Australian retailer Woolworths in China after the two companies announced a new cooperation agreement.

The pair signed the agreement, which is set to facilitate a series of cooperative projects, at the 2019 China International Import Expo (CIIE).

As part of the agreement, Yonghui will sell Woolworths' Australian branded goods through its physical stores and online via its Younghui shopping app.

In a press release, Yonghui said its customers place importance on food safety and quality, qualities that Woolworths has a reputation for.

At CIIE Ming Mu, core partner of Yonghui Superstores, said this agreement would build on the company’s range of imported goods.

“Yonghui has been committed to strengthening the international supply chain. At present, Yonghui directly imports goods in 35 countries on five continents,” he said.

“In 2018, Yonghui’s sales of imported goods reached US$563m of which Australian fresh food is about US$15m. The total amount of Australian commodities is expected to exceed US$40m in 2019.'