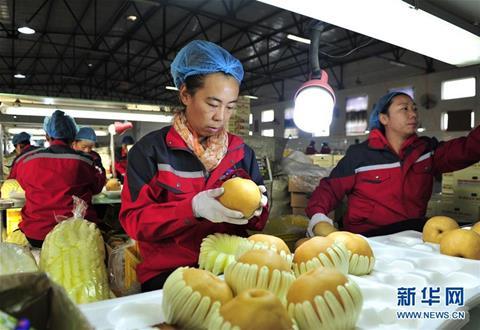 Pears grown in China look set to reach a new frontier, with the country’s general administration of customs releasing details of the phytosanitary requirements for exporting the fruit to Brazil.

The development of market access in the South American country is a sign of encouragement to an industry that’s continually expanding.

According to the United States Department of Agriculture (USDA), China is the world’s largest producer of fresh pears, with production expected to reach 17m tonnes in the 2019 season.

Fresh pear exports from China are anticipated to reach 500,000 tonnes this season, representing a 40 per cent increase from the previous years’ total of 336,000 tonnes.

It’s important to note the 2018 season was affected by poor climactic conditions, and thus an increase in exports was premeditated.

According to the announcement, the export requirements include the review and registration of all fresh pear orchards and packaging plants, to be completed by the General Administration of Customs China (GACC), and provided to Brazil’s Ministry of Agriculture, Livestock and Food Supply (MAPA) and no later than 30 days prior to export.

Planting production must follow the ‘Orchard Comprehensive Management Plan’ issued by both GACC and MAPA, and a traceability system is to be established during the harvest process.

In addition to this, fresh Chinese pears that have been sorted and packaged for export need to be separately stored at 0-2°C, and should not be stored with other types of fruits that are exported to other markets.

Bian Qinggang, general manager of Hebei Tianbo Fruit Industry, said in a previous interview with Asiafruit, that: “although the pear industry has noticeably picked up this season, all sectors of the industry must remain vigilant, improve quality, carefully process and prevent fruit diseases, and then increase exports to ease pressure on the domestic market.