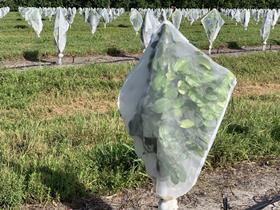 Few, if any, produce sectors have seen such precipitous decline in production in recent years as Florida citrus.

The culprit was a series of hurricanes that hit the ‘Sunshine State’ over the last quarter century, which intensified pests and disease throughout the growing areas, sickening and killing trees.

Grapefruit production fared particularly poorly, dropping from 55.8m field boxes (38.5 kg) in 1996 to just 4.6m boxes last year. Many industry veterans felt it was only a matter of time before the Florida citrus industry ceased to exist altogether.

Not everyone is willing to concede Florida’s industry has met its demise, however. IMG Citrus of Vero Beach is actually ramping up its acreage and upgrading its packing facilities, betting that Florida citrus is ready for a rebound.

“Florida grapefruit continues to enjoy the reputation of being the very best in the world. However, our industry is facing extinction and we can’t allow this to happen.”

With a look to the future, IMG Citrus recently invested US$1.5m in a state-of-the-art electronic grading system with the ability to sort 7,200 grapefruit per minute for blemishes, weight, colour, shape and density, with 99 per cent accuracy.

In another move, IMG Citrus acquired 1,620ha of grapefruit production, making it one of the largest growers in the state.

“It’s a well-established grove with a good mix of colours and varieties,” noted Michel. “We’ve re-named it the ‘Happy Food’ orchard after one of our best-known labels.”

Citrus greening, also known as HLB, is spread by the Asian citrus psyllid (ACP); it is the primary disease laying waste to Florida’s groves.

HLB is 100 per cent fatal to trees that become fully infected.

However, Michel is optimistic that a cure for HLB is not far off. In the interim, Florida’s citrus industry has developed some techniques to keep its remaining groves commercially viable.

“We’ve just planted grapefruit acreage in high-density, with the young trees covered in bags to keep the psyllids out,” explained Michel.

“The goal is to allow the trees to develop a strong root system and provide them the best chance against HLB. So far, our new trees are looking quite healthy.”

Florida’s grapefruit production is forecasted to hit 4.6m field boxes for the coming season – a 19 per cent increase over two years ago.

“The European Union, particularly France, continues to be our best international market,” said IMG’s vice president, Veronique Sallin. “They want the best and are willing to pay for it.”

Japan remains a major destination for Florida grapefruit as well. However, a lagging economy has obliged importers to reduce their margins to compete against cheaper but lower-quality fruit from other sources.

This article appears in the November edition of Asiafruit Magzine, out now.