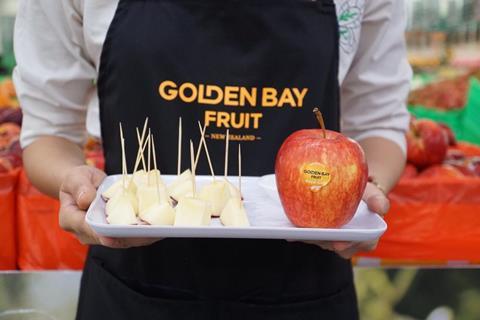 After Singapore last year, GBF has opened its third offshore office in China

The office will cover the company’s sales and marketing across mainland China, Hong Kong and Taiwan.

“It was totally natural for us to open our new office in China as this market needs a full-time dedication of resources to provide the best service possible”, said Heath Wilkins, GBF founder and managing director. “This also comes to support our fast development there and strengthen our presence into Asia. We cannot be more excited to start 2020 season.”

GBF is the largest vertically integrated apple company on New Zealand’s Southern Island. In addition to its headquarters in Motueka, GBF has offices in the UK and Singapore.

With a range of propriety offerings in its varietal profile, the company is well poised to grow its footprint in China, according to Wendy Cai, GBF’s new Shanghai-based regional commercial manager.

“GBF is now growing some of the most exciting new IP varieties we can probably find in the world, including Cherish and Miranda apples, but also PiqaBoo pears, which already have the favours in China as they bring delightful tastes and experience to consumers,” Cai said.

Reflecting on a highly successful 2019 campaign, GBF’s global commercial manager, Patrick Meikle, said Chinese consumers have shown strong demand for the range of quality products his company has to offer.

“It [2019] has been an incredible year for Golden Bay Fruit in China, with a growth of nearly 1,000 per cent compared with 2018 with a demand that has never been stronger,” Meikle said. “This was of course due to a specific context of a decreased local apple production, but this still illustrated real trends and increasing demand from Chinese consumers for safe and tasty high-quality imported fruit.”