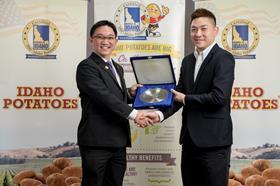 As the brand ambassador of the IPC, Tan will promote the nutritional health benefits of Idaho potatoes to Malaysian consumers consumers.

Tan is a former world number one men’s doubles player and is a popular figure among the Malaysian Badminton Association and the international badminton circuit. He also holds the Guinness World Record for the fastest badminton smash of 493 km/hr.

The IPC said ideal growing weather and harvesting conditions have delivered a bumper crop of exceptional Idaho potatoes for export this year. This will be accompanied by worldwide trade and consumer promotional campaigns.

The potatoes will be available from November onwards in displays at the major hypermarkets and supermarkets where there will be a focus on promoting the Vitamin C content and cooking performance of the potatoes.