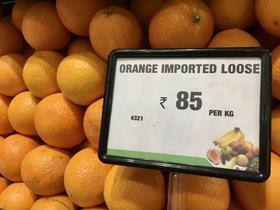 India’s fresh fruit imports hit record levels in the 2021 calendar year, doubling to 721,493 tonnes, up from 359,716 tonnes in 2020, according to Fresh Intelligence analysis of data from the Indian Ministry of Commerce.

Apples and oranges drove the increase, together accounting for more than 80 per cent of total fresh fruit imports.

The growth in apple imports was led by Iran and Turkey. Iran became the largest apple supplier, with data from the Ministry of Commerce showing direct imports of 96,982 tonnes, up a staggering 249 per cent on 2020 volumes. A further 42,617 tonnes of apples were channelled through the United Arab Emirates (UAE), with Iran being the likely source, according to Fresh Intelligence analysis.

Turkey was the second-largest supplier, increasing its shipments to India by 131 per cent to 73,827 tonnes. Chile rounded out the top three, with an almost three-fold increase in sendings to some 55,674 tonnes (up 178 per cent year-on-year).

Significantly, the US, previously a long-term leader in apple imports to India, dropped down to ninth position behind Iran, Turkey, Chile, Italy, the UAE, New Zealand, Brazil and Afghanistan.

All top ten apple suppliers recorded significant growth in sendings in 2021, apart from the US, whose volumes almost halved to 21,385 tonnes. The downturn in US imports reflected the impact of a punitive 70 per cent tariff on US apples resulting from trade wars under previous US president, Donald Trump, as well as shipping challenges.

Orange imports increased more than three-fold to 153,296 tonnes, driven by a surge in sendings from Egypt. The North African nation shipped 126,000 tonnes of oranges to India in 2021, up more than 374 per cent year-on-year, giving it an 82 per cent market share.

South Africa increased orange shipments by more than 80 per cent year-on-year to 19,811 tonnes. Australia was the third-largest supplier by some distance, with volumes declining slightly to 3,017 tonnes.

Oranges overtook kiwifruit as the third largest import category, even though kiwifruit imports also grew strongly, rising by 43 per cent year-on-year to 67,247 tonnes. Again, Iran was the main supplier, with direct shipments of almost 30,000 tonnes, up 51 per cent on 2020.

An additional 18,127 tonnes of kiwifruit came in from the UAE, which was likely to be Iranian fruit, according to Fresh Intelligence analysis. Chile shipped 13,862 tonnes of kiwifruit, a 26 per cent increase year-on-year, while New Zealand sendings remained flat at 5,625 tonnes.

Avocados, cherries and blueberries all recorded strong growth in 2021, albeit off very small bases, according to Fresh Intelligence analysis. Avocado imports more than doubled to 888 tonnes, with Peru being the major supplier, followed by New Zealand.

Cherry imports topped 650 tonnes, an increase of 125 per cent year-on-year. Chile ranked as the largest supplier, shipping 239 tonnes, followed by Afghanistan (229 tonnes) and the US (59 tonnes).

Blueberry imports jumped to 345 tonnes from just 43 tonnes in 2020, according to Fresh Intelligence analysis.