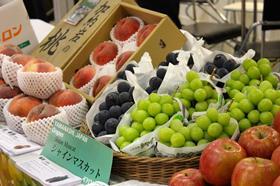 A bill aimed at protecting the intellectual property control over Japanese fruit and vegetable cultivars has passed in the National Diet, in a move that producers hope will stop the illegal outflow of cultivars developed by the country’s plant breeding.

Japan Times reports the revised seed and seedling protection law, expected to take effect in April 2021, will allow plant breeders to designate areas where their varieties can be grown and export destinations when they register their species.

Developers of such registered species will be able to seek an order to stop the production of their cultivars outside designated areas or exports without authorization.

The reproduction of registered varieties using seeds collected from their harvest will also be prohibited without consent of the developers.

Individuals who illegally take seeds and saplings abroad face prison sentences of up to 10 years or a fine of up to ¥10m (US$95,739).

Seeds and seedlings of several dozen Japanese-developed plant varieties, including Benihoppe and Sagahonoka brand strawberries and Shine Muscat grapes, have been grown and sold without permission in countries such as China and South Korea, according to Japan Times.

The Agriculture, Forestry and Fisheries Ministry initially submitted the bill to the Diet in March 2020, but deliberations took longer than expected after concerns grew about the possibility of farmers paying high license fees.

The revised law also calls for reducing the risk of seeds and saplings being given to a third party by introducing a permission system for the use of seeds that domestic farmers collect from new varieties they harvest for next season's planting.

During deliberations on the bill, opposition parties objected to the permission system, out of concern that high permission charges may weigh on farmers' businesses.

Hoping to address such concern, the House of Representatives Committee on Agriculture, Forestry and Fisheries passed an additional resolution asking the central government to implement measures to ensure stable supplies of seeds and saplings at reasonable prices, so that the restrictions on farmers' use of seeds collected from their own harvest will not squeeze their business operations.

A farm ministry official said in Diet deliberations that developers, many of whom belong to public institutions, rarely charge high royalties on plant varieties they breed because their goal is to help promote domestic farming.