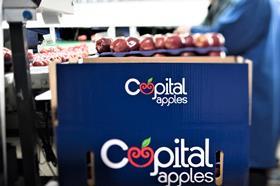 New Zealand apple and pear exporter JR’s Orchards will increase its focus on Asian markets this season, as it looks to avoid a supply bottleneck in Northern Europe.

The company expects to export some 255,000 cartons of apples during its 14-week programme, an increase of 25 per cent on its last solid season in 2020.

It will market some 10,000 cartons of pears – its smaller, secondary line – between March and May.

“Apple size is up by two counts on all varieties due to near-perfect conditions. We had a mild spring and warm summer,” said Jamiee Burns, operations director of JR’s Orchards.

Burns said JR’s forecast was slightly ahead of the forecast provided by peak body New Zealand Apples and Pears, which predicted an industry-wide increase of 17 per cent on the 2020 season.

The promising outlook comes on the back of a challenging 2021 campaign.

“This year, we’re back to full strength with seasonal workers under the Recognised Seasonal Employers (RSE) scheme, we’ve grown our markets and are looking forward to an excellent season.”

In a normal year, Burns said 35 per cent of the company's fruit was exported to Europe, 30 per cent to the UK and 25 per cent to Asia. The remainder goes to the Middle East and its developing market in India.

The flow-on-effect of the Russian-Ukraine conflict has prompted JR’s to slightly restructure its programme on the eve of the 2022 campaign.

“With Russia shut, fruit and vegetables from around the world are landing in Rotterdam,” Burns explained. “This will cause major disruption to supply lines and drive prices down – and that’s before fruit from the Northern Hemisphere arrives.

“Our fruit is currently at sea and due to land in the next few weeks. We’ll be working to expand our customer base into Asia and focusing on Vietnam, Thailand and Malaysia until the situation improves.”

Another challenge for New Zealand exporters is what Burns described as the “horrendous” cost of shipping.

“Container space is tight and the cost is nearly double what it was last year, which will be a barrier for some,” she explained.

From its base near Wellington, JR’s Orchards grows and markets four pear and six apple varieties. Its Ecco brand is renowned for delivering quality apples and pears, while its Capital brand has been developed especially for apples to provide a strategic differentiation in the marketplace.

In 2023, JR’s will harvest its first Lady in Red apples – a high colour Cripps Pink cultivar marketed as Pink Lady.