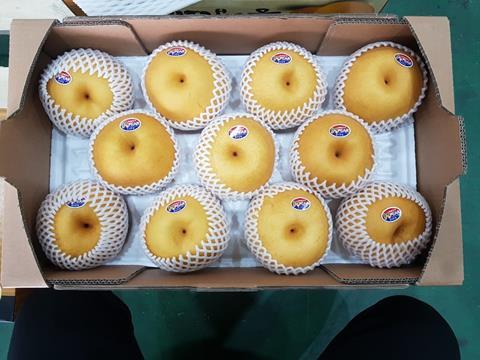 The initial shipment of 13 tonnes will increase to 100 tonnes by the season’s end, with IG planning to distribute the fruit to consumers in Delhi, Mumbai and Bangalore.

“There are only western pears available in Indian markets at the moment, so it will be great opportunity to introduce K-pear to Indian customers.”

K-pears are grown in the Korean region of Chungnam, renown for its ‘rich soil and plentiful sunshine’. The fruit has a distinctive round-shape and is adorned with a yellowish-brown color, differentiating it from western pears.

Director of IG International, Tarun Arora, added the company has plans to increase quantity over the coming years.

“We have complete confidence in the quality of K-pear and are positive that we can increase the quantity imported to India from 100 tonnes to 1,000 tonnes in the next three to five years,” said Tarun Arora.