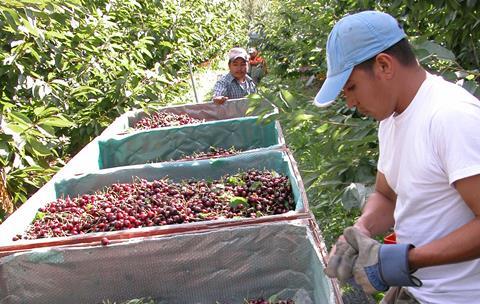 When we last left you, we reported on a North American cherry season beset with problems. Not much has changed since.

Weather – or more precisely, bad weather – continues to be the root cause of the challenges facing growers from California to British Columbia in 2022.

For California, it was spring frosts and several ill-timed rains that struck the growing regions and ultimately reduced production to just 5.4m cartons (8,2 kg) – roughly half of last year’s record total of 10.1m cartons.

In Washington, the wettest spring in over a century, late-season snows and an unusually chilly spring that lasted well into the summer combined to set the lightest Northwest cherry crop since 2008.

A little further north, growers in British Columbia, Canada, have been struggling with similar weather woes but are optimistic that their late-maturing orchards will come through mainly unscathed.

Mother Nature’s volatility has forced the Northwest Cherry Growers (NWCG) association to continually revise its seasonal production estimates. Its latest, issued in mid-July, called for a packout of just under 12.5m cartons (9.1kg). If accurate, this would amount to the fewest shipments from the Pacific Northwest since 2013. By comparison, Northwest cherry production averaged 23.3m cartons between 2016 and 2021.

“We’re working on 50 per cent of a crop this year,” said Dave Martin of Stemilt Growers. “Daily volume continues to be mediocre; we should be shipping 70 to 80 thousand cartons per day but at the moment, the average is more like 30,000. That’s just 15 truckloads.”

Martin notes that much better weather is forecast in the coming weeks with seasonally hot temperatures, which bodes well for a positive end to the Northwest deal.

“Our late-season fruit looks to be relatively unaffected by the earlier poor weather,” said Steve Reinholt of Starr Ranch Growers. “There’s a wide range of maturity out there, however, and that will likely keep the industry shipping fruit through August at least.”

The NWCG takes it a step further, predicting shipments lasting well into September this year, making 2022 “the latest-running Northwest cherry crop on record.”

Exports have traditionally comprised a significant percentage of the Pacific Northwest seasonal distribution, averaging well over one-third of total industry production. That’s not the case this year.

“Given the high FOB prices, airfreight cost and the strong US dollar, there’s not been a whole lot of exporting going on so far,” said Marc Pflugrath of CMI Orchards. “With production off substantially, most of the fruit is staying on the domestic market. The last several weeks of the deal should see better volume but it still won’t be anything close to normal.”

As the latest deal in the Northern Hemisphere, but running late as well, British Columbia’s cherry industry is optimistic about the remainder of its season.

“We normally are up and running by the end of the first week in July but it now looks like closer to the third week of the month,” said Ricky Chong of Sutherland Produce.

“We may have gotten lucky with this late start; about 60–70 per cent of our fruit looks to be in pretty good shape. It all depends on what happens with the weather from here on, but we should be shipping into September this season, which should put us in good shape to supply the (Chinese) Moon Festival.”