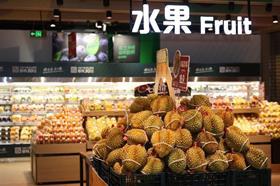 The grand promotion ran for 11 days ending at midnight on Singles Day (11 November), and featured the most merchants and brands in JD’s history.

Even in during the pre-sale for the grand promotion (20 October to 31 October) Chinese consumers sought out their favourite brands, including fresh produce.

The e-commerce giant also used Singles Day as an opportunity to highlight its growth in other areas. On 11 November. Japanese retailer Muji and JD.com’s Seven Fresh jointly launched a fresh food complex in Shanghai, marking the first appearance of the fresh food supermarket in the city.

Integrating functions of procurement, cold-chain warehousing, processing, sorting, packaging and fulfillment, it connects the agricultural industry belts in northwestern China. On the night of 10 November, the centre processed its one-millionth order.