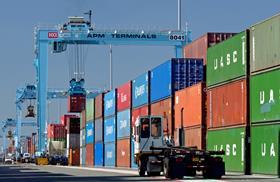 Congestion at Asian ports has declined towards the end of November 2021, a trend that could bode well for exporters ahead of the crucial holiday/Lunar New Year Period.

According to a report from Bloomberg on 20 November, signs were positive across a number of the region’s key ports.

“Total traffic in Shanghai-Ningbo declined by 0.2 per cent from the previous week and Hong Kong-Shenzhen’s ship count dropped 10.4 per cent,” according to an analysis of data by Bloomberg News.

“Singapore, Asia’s third-largest trade hub, saw a week-on-week drop of 14.7 per cent as a backlog visible since early November looked to be largely cleared.”

However, the trend is not consistent across the entire region or even across countries. In China, the ratio of ships waiting to those in port crept up in Tianjin and a Covid-19 outbreak in Dalian affected operations. Manila in The Philippines is also facing congestion.

Although any improvement in shipping congestion will be welcomed by exporters, the long-term outlook still remains unclear.

Lars Jensen, chief executive of Vespucci Maritime in Copenhagen, said the odds remain stacked towards a worsening before it gets better.

“There is still significant risk of port impact from Covid outbreaks especially in China, there is risk of more cargo surge putting pressure on the supply chain as shippers already now begin to push cargo through rather than wait for the traditional rush before Chinese New Year,” said Jensen.