Port of Tauranga on track for profit rise 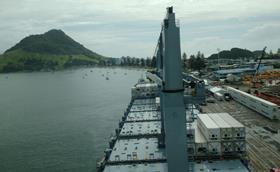 The Port of Tauranga has reported 15 per cent growth in volume and net profit in the first quarter of 2018, setting the New Zealand port up for a 10 per cent profit increase for the financial year.

“Based on the first quarter’s performance, and notwithstanding any significant market changes, we expect full year earnings to be between NZ$88m and NZ$92m,” said Port of Tauranga chairman David Pilkington. Last year's after tax earnings reached NZ$83.4m for the year ending 30 June 2017.

Container numbers grew 26 per cent in the three months to 30 September 2017, due largely to a significant increase in transhipment.

“The trend to larger ships, and those ships making Tauranga their only Australasian call, has led to a significant increase in transhipment,” Pilkington explained. “Transhipment of cargo from other New Zealand ports to Tauranga has quadrupled in the past year.”