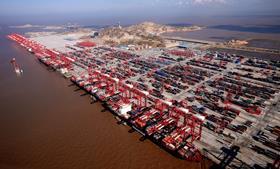 Ports across China are slowly recovering from the disruptions caused by coronavirus (Covid-19) however, reefer containers are still feeling the effects.

According to a report from Reuters, congestion in Chinese ports is easing as more staff return to work, but the reefer supply imbalance is taking longer to resolve.

During the peak of disruptions some reefer containers were left suck in slow-moving ports while others were diverted into other parts of Asia.

Zhang Ruxing, secretary general of the container division of China Ports & Harbours Association, said the backlog was starting to clear.

“There were staff shortages everywhere, at berths, among inspectors, truck drivers and at downstream companies. But it’s getting much better now, as people are coming back,” Ruxing told Reuters.

This statement was echoed by Hapag-Lloyd, which told Reuters in a statement that berthing operations had improved, and terminals have resumed normal working conditions.

More places to plug in reefers had also become available and the company is no longer diverting cargoes on a large scale, it said.

Still, it is expected it I will take some time for operations to return to full spend and in the meantime, reefer rates may remain high.

Frank Madsen, global director of reefer and marine logistics of Danish freight forwarder Blue Water Shipping, told Reuters short-term rates had increased by up to 200 per cent and there was a possibility they could go even higher.

“There’s both a space and equipment issue that we think could continue for four to eight weeks,” Madsen said.