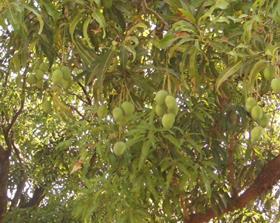 India’s leading independent news service, IANS, is reporting 25 per cent of this season’s mango crop grown in the northern Indian state of Uttar Pradesh has been damaged by a storm characterised by high-speed winds and heavy rains.

President of All India Mango Growers Association, Insram Ali, told IANS the erratic weather conditions that began with a harsh winter and non-seasonal rains have already reduced the yield by about 30 per cent.

“This storm has dealt a severe blow to the crop and even the trees have been damaged this time,” said Ali.

A large amount of the semi-ripe crop, especially the Dussehri variety – known as the king of mangoes – had dropped off due to the winds.

'Selling the semi-ripe mangoes (that can be used to make chutney or stored as khatai) in the retail market is also not an option because of the lockdown. The Dussehri has also been damaged and the fruit has become stained,' noted Ali.

The impact isn’t just confined to the Dussehri variety, either. According to the report, later varieties including the Chausa, Langda, Safeda and Lakhnauva have also been adversely impacted by the weather conditions.

The mango is a very weather-sensitive crop, especially during its flowering stage. Extended winter condition experienced this year have delayed and also reduced the emergence of flowers.

'The entire mango cycle has been delayed this year because of weather conditions. Repeated rains and hailstorms are further damaging the yield. This could affect the taste of the fruit too,' added Ali.

News of the widespread damage caused by weather events comes as a further blow to India’s mango industry, which recently announced prices would continue to take a hit due to supply chain issues and a lack of consumers, resulting from the Covid-19 pandemic.