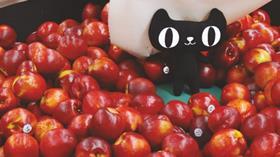 Tmall, Alibaba's B2C e-commerce platform, has kicked off its 6.18 mid-year shopping festival with imported fruit promotions among the deals.

The festival began on 2 June and will run for a number of weeks as Tmall attempts to boost consumption in China and help global brands capture new post-Covid-19 consumer behaviours and trends.

Global travel restrictions have made e-commerce platforms such as Tmall Global a gateway for global brands to access theChinamarket.

This has resulted in more than 25,000 brands, nearly twice as many as 2019, from 92 countries and regions participating in this year's festival.

Imported fresh food from Thailand, Malaysia, Singapore, Chile and Russia will be offered for the first time via their country flagship stores on Tmall. Meanwhile, the Netherlands and Hokkaido, Japan are scheduled to open their respective flagship stores in June.

The Thai flagship store is operated by the country’s Department of International Trade Promotion (DITP) under the Commerce Ministry, which has been running a campaign to promote Thai fruits in China.

Somdet Susomboon, director-general of DITP, told the Bangkok Post the festival would be a chance to build awareness of Thailand’s fruits.

'This is our first time taking part in Tmall's big mid-year festival as a country,” Susomboon said.

“We hope to present some of Thailand's best fruit, food and beverage products to Chinese consumers, while also building their understanding of the uniqueness of Thai products.”

Zhu Xia, managing director of Tmall Food & Fresh, said Tmall had worked to bring in products from across the world.

'As online commerce has become popular and an essential channel for retailers to effectively reach consumers in the post-coronavirus era, we have put in extra effort this year to bring together some of the world's best delicacies to Chinese shoppers,” Zhu told the Bangkok Post.

“We are thankful for DITP's partnership and support to make Thailand's signature food products a hit during the Tmall's festival.”