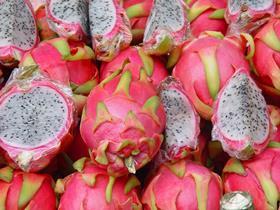 Vietnamese fresh produce exporters have embraced irradiation technology and the prospect of more facilities could bring a competitive edge.

Vietnam currently exports US$20m worth of irradiated fruit to the US a year and The International Atomic Energy Agency (IAEA) and the Food and Agriculture Organization of the United Nations (FAO) have plans to help expand the service to compete in additional markets.

Hoang Trung, director general of Vietnam’s Plant Protection Department, said exotic fruits such as mango, dragon fruit, and lychee account for the majority of the irradiated fruit, most of which is exported to the US.

“We use food irradiation because this technology can reduce food loss and facilitate agricultural exports,” said Hoang.

Vietnam now has 11 irradiation facilities, which mostly use Gamma rays to treat around 1 tonne of fruit per hour. In 2019 an average of 200 tonnes of fresh fruits were irradiated for export per week in Vietnam using gamma and x-rays.

Carl Blackburn, food irradiation specialist of the joint FAO/IAEA programme for nuclear techniques in food and agriculture, said although the idea of using irradiation as a phytosanitary treatment had been around for decades, acceptance in the commercial fruit market had been slow.

However, Blackburn said this had changed in recent years as with uptake from major players in the fruit trade including India, Thailand, Vietnam, the US, Australia and New Zealand. Plus had consumers embraced the year-round availability of chemical-free fruit the technology could provide.

“Irradiation is gentle on the fruit but not on the pest,” explained Blackburn. “The treatment is optimised to neutralise pests while retaining most nutrients and having least impact on flavours, textures and colours.”

Blackburn noted more countries had expressed interest in the treatment, but capacity was an issue.

“We know there is a need, but seasonal fresh fruit is competing with industrial goods and medical equipmentthat are routinely irradiated all-year-round in a facility,” he said.

One answer may portable irradiation devices, a solution Blackburn noted was already being trialled on spices in some countries.

“Right now, you have to take the food to an irradiation facility but in the future, we hope to bring the irradiation to the food, as part of normal operations,” said Blackburn.