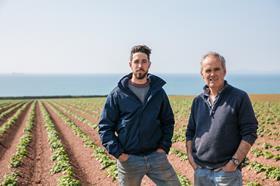 Puffin Produce has announced a partnership with Aldi to stock its exclusive range of local Pembrokeshire Early potatoes in stores across Wales.

The Haverfordwest business worked with Aldi to roll out a new line of the potato variety as part of the supermarket’s award-winning Specially Selected range from June.

The heritage early potato variety is grown in Pembrokshire in spring, with harvesting beginning in May.

Puffin Produce expects to supply around 200,000 packs of the new range to Aldi’s Welsh stores over the next two months.

Nia Williams, national account manager at Puffin Produce, said: “The Pembrokeshire Early Potatoes we’re launching into Aldi stores have been grown in Pembrokeshire since the 1700’s and are considered one of Wales’ most treasured products. We’re incredibly excited to be rolling them out for Aldi shoppers in Wales to enjoy.”

The launch of new Specially Selected Early Potatoes form part of Puffin Produce’s ongoing partnership with Aldi, having started working with the supermarket in 2017.

Since then, the firm has supplied a host of potatoes grown and packed locally to Aldi’s Welsh stores throughout the year, which has helped the firm to create an additional 20 jobs in the area to meet the growing demand.

Nia Williams added: “Aldi’s support has helped us to grow our business significantly while still being able to supply fantastic quality, sustainable and locally-grown fresh produce. We have exciting plans to expand our offering in the near future and look forward to continuing to develop this relationship.”

Julie Ashfield, managing director of buying at Aldi UK, said: “Puffin Produce’s range of potatoes has proven incredibly popular since we started working with them, and we’re confident that the new Specially Selected Pembrokeshire Early Potatoes will be a hit with shoppers in Wales.

“Building long-term relationshipswith British suppliers has been key to our growth, so we’re delighted that we’ve been able to help Puffin Produce on their journey so far, and look forward to continuing our work with them in the future.”