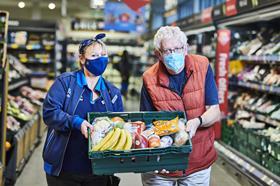 Aldi has announced that it supported charities, community groups and food banks throughout the UK by donating 550,000 meals to people in need over Christmas.

The supermarket paired its stores with local organisations to redistribute unsold fresh and chilled food after stores closed on both Christmas Eve and New Year’s Eve. This was part of its pledge to donate 1.8 million meals to families experiencing food poverty during November and December.

Around 550,000 meals were donated nationwide, and more than 700 UK causes benefitted from the initiative over the festive period, according to Aldi.

Marcus Rashford MBE is a founding member of the Child Food Poverty Taskforce,a coalition of charities and food businesses set up in September 2020 calling on the Government to implement recommendations from theNational Food Strategy.

He said: “The festive period has always proved a difficult time for the most vulnerable in society and this year is no exception. Post-Covid-19, the need for support is higher than ever.

“It’s great to see that Aldi continues to take steps to support our children though their food donations programme. The work of Aldi, and of other members, has been a true lifeline for many and I’m proud to stand alongside them to guarantee we reach as many in need as possible this Christmas. Thank you to all involved.”

Aldi’s food donations are part of its partnership with Neighbourly, a community giving platform that links businesses to charitable organisations.

As part of the partnership, all of Aldi’s 950+ UK stores now donate surplus food to charitable causes seven days a week, all year round. The retailer introduced community donation points in all its British stores in 2021.

The recent Christmas donations have helped Aldi meet its pledge to donate 10 million meals to families in need in 2021 through its partnership with Neighbourly.

Since beginning the collaboration in April 2019, Aldi has donated more than 20 million meals across the UK.