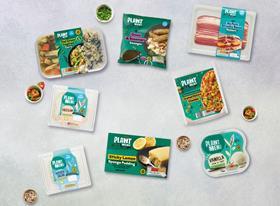 Sales of Aldi’s plant-based products soared by 500 per cent year-on-year during this year's Veganuary campaign.

The UK’s fifth largest supermarket expects the increase in demand for its plant-based products to continue this year, with Aldi having expanded its range for Veganuary by more than 50 per cent in response to demand.

This growing plant-based trend is not isolated to Veganuary, as Aldi also saw a more than 250 per cent increase in 2021 for sales of its vegan range compared with the year prior.

The supermarket’s vegan offering spans from ready meals and frozen food to bakery items and confectionery, helping to provide a range of plant-based alternatives in response to increased customer demand.

Julie Ashfield, managing director of buying at Aldi, said: “Veganuary is getting bigger and bigger each year as the UK’s appetite and interest in plant-based food grows.

“In response to that demand we’re continuing to expand our vegan offering, giving our shoppers plenty of choice and all at great value.

“But it’s also a trend that we’re witnessing year-round and, as more and more people adopt this diet, we expect these products to remain popular throughout the year.”

This year, record numbers of Brits were once again expected to take part in the month-long 'Veganuary' dietary challenge, as growing concern about the climate crisis heightens interest in the Veganuary movement and more large employers promoted it internally.

In 2021, 582,000 people from 209 countries and territories (of which a quarter were in the UK) officially took part in Veganuary. However, the campaign’s research suggests that potentially 10 times as many people participate and a significant number continue with plant-based diets beyond January. Indeed, by the end of January, Veganuary expected to have reached the milestone of a total 2 million participants since its launch in 2014.

During the 2021 campaign, more than 825 new vegan menu options were launched in Veganuary’s key campaign countries, which include the UK, the US, Germany, Chile, Argentina, Brazil and India, according to Veganuary communications director Toni Vernelli. With yet more plant-based meals arriving on supermarket shelves to coincide with this year’s campaign.

“UK supermarkets have really embraced Veganuary in terms of launching new products,” Vernelli told FPJ. “We are definitely seeing a lot of involvement from retailers again this year with Aldi, Asda, Tesco, Morrisons and Lidl all using Veganuary signage in-store to showcase their vegan food. This is the first time Lidl has used our name in-store so that’s exciting. They have all also brought out many new products and ranges for Veganuary.”

But, while Veganuary has undoubtedly pushed the concept of veganism out from the culinary shadows and helped drive development of plant-based meal alternatives – does the campaign have any impact on fresh fruit and veg sales, which, after all, are archetypal vegan fare?

Kantar retail figures are inconclusive. Although UK fresh produce sales (both volume and value) have consistently spiked in the month of January for the last four years, sales also increase at other points of the year, typically May, June and July for fruit and December for veg.

Veganuary’s Vernelli believes UK produce firms could take a leaf out of the alt-meat producers’ book and go “all out” promoting their products via ads and recipes during the month of January. She added that perhaps the Veganuary campaign could present an opportunity for industry-wide collaboration.

“People tend to get very excited about plant-based vegan foods, but they need to be reminded that fruit and veg are vegan too, and are very good for you,” she said.

“We are always really happy to work with businesses and brands, and we think it would be great to partner with growers to promote British fruit and veg next year. We’d love to hear from anyone who is interested.”

Jack Ward, ceo of British Growers, responds to this suggestion with caution. “As a veg industry we need to be careful here,” he told FPJ. “Looking at the Veganuary website, one of their stated aims is to end animal farming and for this reason we are not going to endorse that kind of sentiment. There will be veg growers with an interest in livestock production.”

Does Veganuary do much for veg sales? “It probably acts as a reminder to many people about the importance of veg in the diet particularly after the excesses of Christmas,” he continued. “But looking at the ingredients of one plant-based mince whose only vegetable content is fractional and in the form of beetroot and carrot concentrate, one has to ask about the extent to which eating more of these meat alternatives will support say brassica production here is Lincolnshire?”

“While the tailwinds for plant-based are robust, I do worry that a lot of mass preconceptions, like plant-based is inherently better for health or the environment, might be challenged this year,” he said. “A lot of plant-based items are actually terrible from a nutrition and sustainability standpoint.”