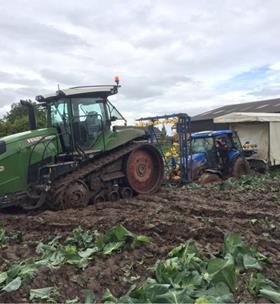 British Growers’ Association (BGA) chairman Jack Ward said there needed to be an “urgent review” on the sustainability of UK brassica production, as the losses mount for embattled growers, who have endured extreme rains this winter.

Parts of Lincolnshire experienced half of its annual rainfall in the last three months of 2019, with the first weeks of 2020 not faring any better. Disease and waterlogged conditions have seen production levels pushed down dramatically.

Cauliflower, kale and Savoy cabbage will start to run short in February and March due to the excessive rain, according to the BGA, while late cauliflowers due for harvest in April and May will also be in short supply.

Brassica growers are now considering ditching the greens for lower-risk cereal crops as a safer and more profitable alternative, with lines such as broccoli - which has high labour requirements - in particular danger.

“There is a cruel irony here. As we embrace the importance of vegetables in the diet and recognise the need to increase our consumption of vegetables and fruit, our brassica growers are contemplating exit strategies rather than increased future investment,” Ward said.

'We need to rethink the supply model for vegetables. While cheap vegetables may look like an attractive proposition, some of the current pricing models fall well short of allowing growers to meet the true costs of production. Ultimately this is eroding our supply based and productive capacity. This is not where we want or need to be as we move into a brave new post-Brexit economy.”