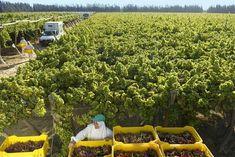 An unseasonably cold January will cause a serious dent in Egyptian grape availability.

Dr Ihab Tadros of the Egyptian Producers’ Consortium, said: “We had unexpectedly cold weather for Egypt in January and, although at the time we thought that it was too early to affect grapes, it has affected the crop in some, but not all, growing areas.”

Of the two main production regions in Egypt - Upper Egypt in the south and the desert area between Cairo and Alexandria - it is the earliest region, Upper Egypt, that has largely seen its grape production affected. “We won’t be starting as early as we thought,” said Tadros. “It is mainly white Sugraone and Flame Seedless that are affected, as they are the early varieties.”

He estimates that the harvest in Upper Egypt will begin around May 15, with production from the desert area coming on stream some 10 days later.

Although the season will therefore be a little shorter than usual, Tadros reports excellent-quality fruit. “The temperature differential between day and night was very high, and we have had difference of about 10°C, which is very good for quality,” he explained. “Also, because there have been fewer bunches on the vines, berry sizes are larger, so we are expecting good, large berries with high sugar levels.”

Tadros is hopeful for Egyptian opportunity in the marketplace, as late-season Chilean supply has had quality problems, and unseasonably cold weather has also affected Israeli production.