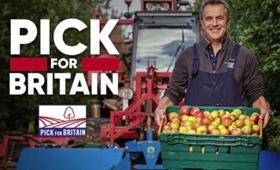 Defra has dropped its nationwide ‘call to arms’ Pick for Britain campaign, designed to draft in domestic workers for seasonal farm roles, in favour of a more targeted recruitment drive involving the Department for Work & Pensions (DWP) which runs UK Job Centres.

Launched last year when Covid-19 left many foreign workers unable to reach the UK in time for the beginning of the harvest season, the government’s Pick for Britain campaign consisted of widespread advertising and a bespoke website which directed UK workers to roles.

This year, British growers seeking to recruit home-grown talent are instead being encouraged to register with the DWP who will then advertise their jobs via local job centres.

While the Pick for Britain campaign attracted huge interest – with tens of thousands of Brits applying for thousands of roles during the first national lockdown – and received major backing from Waitrose, ITV and Prince Charles among others, relatively small numbers of recruits made it onto farms.

One NFU survey conducted last year suggested UK workers in horticultural businesses represented about 5.5 per cent of the workforce of the 70,000 picking and packing roles required across the 2020 season.

“Last year’s campaign was a response to Covid-19 risks, and we now need to look at supporting long-term improvements to recruitment pipelines for edible sectors,” a Defra spokesperson said on Monday (19 April).

“Our approach this year builds on experience and feedback from partners and recruiters involved in last year’s campaign, but won’t fall under the same Pick for Britain brand.”

Commenting on Defra’s shift in strategy, NFU’s Ali Capper said: “The problem last year was the Pick for Britain campaign was very untargeted, which resulted in a lot of applications from people geographically in the wrong place who didn’t understand they would need to move to fill the role, or from people with a few hours to spare who didn’t realise what the role entailed.

“Pick for Britain was a real, emergency call to arms, which was lovely and resulted in a huge response, but resulted in very small numbers actually being recruited,' she told Fruitnet.

“This year, Defra has teamed up with DWP to put much more focus on the horticulture sector via job centres, because the government is very keen to recruit domestically.”

Defra’s move to drop the campaign marks a U-turn from the government’s previous position, according to some sources. Defra had said it planned to work with the industry to build on last year’s campaign when it expanded the Seasonal Agriculture Workers (SAWS) pilot to 30,000 permits in December.

Capper said she urged growers to register with the DWP to post their jobs to allow the government to “collect its own data” on uptake and see for itself how difficult it is to recruit these roles domestically.

“It’s really important that growers do post jobs on the DWP website to demonstrate the low-level uptake,” she told Fruitnet. “The industry peak for pickers is May and June. We are now finding ourselves in a situation where we will be competing with hospitality, which is going to be up and running, for seasonal labour.

“The government needs to collect data on this [UK recruitment for seasonal labour] – its own data rather than anecdotal data from the horticulture sector. They need to see how difficult it is to recruit British pickers.”

News of Defra scrapping the Pick for Britain campaign comes amid major uncertainty for growers ahead of the harvest season due to a lack of a government announcement on the two additional labour providers for the SAWS scheme.

“This is causing a lot of anxiety,” Capper told Fruitnet. “We are waiting for the new pilot operators to be announced, and we need that announcement yesterday.”