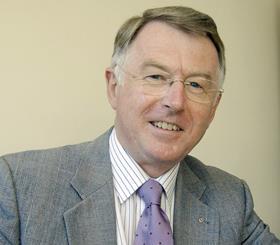 Douglas Wallace Henderson passed away on Christmas Day, 2019. He retired from full time activity in the industry during 2004 but his preceding career and activities had profound, beneficial effects on our trade, which are still being felt today.

A trained accountant, Henderson joined Geest where he gained commercial experience in every aspect of which the Company was involved, rising to a senior level under the auspices of the van Geest brothers.

Based in Spalding, the business covered a complete spectrum of global activities from growing, packing, shipping, importation, marketing, distribution, processing and wholesaling.

When in the late 1980s, several UK fruit trade luminaries got together to discuss the changing face of international and national trade and how an increasingly fragmented and pressurised industry could face up to the challenges, the model of the Fresh Produce Consortium, (FPC), was conceived.

This embryonic idea of a national trade association received a green light from most segments of business. It was launched in 1992, being officially registered and formalised in 1993, with Henderson being chosen as the Secretary.

His remit was to bring each element of the trade together under a common banner that could identify threats, research and apply solutions, to the benefit of all. Under his stewardship/management and a succession of presidents and council members most of these objectives were achieved.

At the outset, the National Federation of Fruit and Potato Merchants, (Wholesalers) merged with the PMA. Later the rapidly diminishing number of independent retailers, represented by their body the Retail Fruit Trade Federation, joined. The last to come to the party were the independent importers.

The whole process took almost ten years and involved some pretty patient and diplomatic negotiating. Henderson had the skills. A quiet, unassuming man, intelligent with a total focus and very even temperament, Henderson raised the profile of the FPC and increasingly gained the confidence and trust of the EU, CIMO, Eucofel, PPMA, grower bodies and politicians nationally and internationally.

He was discrete, sincere and totally trustworthy, characteristics that enabled access to areas not usually open to trade associations. Through his enthusiasm and energetic application to minute detail he fostered schemes that saved the industry millions. Government approval of his packaging waste proposals was one example while the establishment of a body to review and make recommendations on crop applications was another.

Working in conjunction with other international bodies, Henderson was instrumental in helping on the harmonisation of PLU numbers. The FPC under Henderson, successfully engineered an early warning system to identify threats coming over the horizon that could affect the viability and future of the industry.

He cultivated a close association with the FFVIB, an organisation set up to promote the consumption of fresh produce in the UK and was ever raising the profile of ‘Five-a-Day’. A lot of individuals and companies in the UK trade will not have heard of his name but will certainly be benefitting from his innovations and endeavours, for which he was justifiably awarded an MBE.

He was admitted to the Worshipful Company of Fruiterers in 1997 and on standing down from his role as CEO of the FPC in 2004 oversaw the activities of Management Development Services (MDS) for a number of years.

Industry members paid tributes to Henderson online. Fruitnet Media International managing director Chris White said: “Very sorry to learn of the death of Doug Henderson. Such a fine man, a wonderful ambassador for the UK fresh produce business, and a good friend of our magazines over very many years.”

Food safety consultant and nutritionist Barbara Bray MBE, said: “Sorry to hear this news. He was very supportive of me as a new graduate looking for my first job. Such a kind man. He’ll be missed by many.”